I traveled to Germany for work in October. I was there for the Frankfurt Book Fair. I had something like 40 meetings scheduled, spread over three days. Do you know what that does to an introvert? In the weeks leading up to the trip I had been working 6-7 days a week, plus trying to keep up with stuff going on at home. I was stressed out and exhausted. I was also dealing with back issues that required physical therapy, medication, Icy Hot patches, and a tens unit. Walking helped, as did the hotel bed (I later realized that my bed at home was adding to the problem). Despite trying to learn some basics before the trip, I speak very little German. In fact, I speak so little German that I walked into the men’s room at a restaurant. Trying to navigate in a place where the spoken language is confusing is like trying to make sense of the world without your glasses. Everything looks sort of like you would expect, but it is all blurry. It is easy to confuse a jacket for a monstrous shadow and vice versa. This is all to give context… 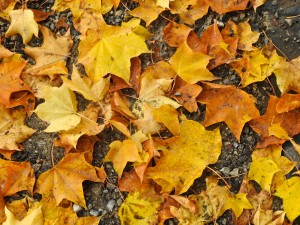 I woke early on Friday morning. I needed to be at the Fair grounds by 9am. It was time to make a decision. I had waited all week to see how I felt physically and mentally. I decided to get up and head to the train station. If I could navigate the subway and buy my ticket, I would go. If I failed to do that, I would accept that maybe I wasn’t up for it.

When I booked my plane ticket, I listened to my boss and booked Sunday to Sunday. That meant that we would have time to adjust to the time difference once we got there and leave Saturday open for meetings, if needed. So far, all of my meetings were scheduled for Wednesday-Friday. Each day, I saw Saturday glimmering in the distance. The idea of a day off looked like a mirage. A dream.

That Friday morning I knew Saturday would be open. It was mine. And I was going to Zurich. Why Switzerland? Because I wanted to go to another country. Because it was only about $100US to get there and back. Because no one could find me there. Because I needed a day off. Because I needed to be alone for a while. Because going to Switzerland for the day sounded fucking ridiculous.

I woke at 4am and walked to the Merianplatz subway station. At 4:50am I watched a subway mouse hop into a hole by the escalator and marveled at German efficiency. I rode an empty car to the Frankfurt Hauptbahnhof. That hour of the morning strips away the kids and parents, the office workers and convention attendees, leaving the shift switch between the night people and the day people.

The train station in Frankfurt is vast and there is fresh, aromatic gluten as far as the eye can see. Waiting on the platform the vending machines offered fine chocolates, Capri Sun, paprika flavored chips, and condoms. 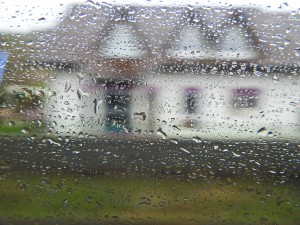 Everything is meticulously planned, until it isn’t. Until the key to the train is lost (happened to my boss who happened to be on another track on an earlier train that wasn’t going anywhere) or the track changes at the last minute. Until the non-stop train you booked suddenly and without much warning stops and ejects you at the Swiss border. 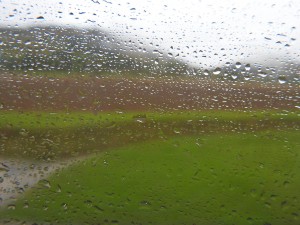 I had been zipping along the dark countryside, reading zines and writing letters. An Indian journalist from Bahrain took the seat opposite me and we chatted on and off. Politics are bad all over. When the conductor announced something I didn’t understand he jumped up and came back a few minutes later telling me what track to transfer to. An American from California and I rushed to the other track and hoped for the best. Everything around me was happening in languages I didn’t understand. I wanted a bit of an adventure and I was getting it. I was glad I didn’t have any plans. The lack of anxiety was refreshing.

The other train felt more like a local commuter train. It wasn’t as sleek and new as the first train. And it smelled like burning rubber. The woman from California and I were the only two people in the train car. Nervous laughter as the train stopped in the middle of nowhere. We could hear the rain beating on the windows. Neither of us understood what the conductor said into his flip phone, but we understood the look of concern when he went outside to stare at the wheels. We shared his concern.

As day finally broke, I was surprised by the landscape. There were beautiful patches, but it was the same as any rail line back home, with blocky industrial buildings and graffiti.

The train ride was supposed to be a little over four hours. We arrived in Zurich a bit late, but in one piece. The station was overwhelming and I needed to pee. I searched for the restrooms and eventually spotted a sign that I understood. The woman from California was ahead of me, but stopped short of the entrance and left. I walked up and saw why. It cost 2€ or 2.50Francs to use the restroom. I left all of my Euro change in the hotel room as a tip for the cleaning staff. I didn’t expect to need Francs as soon as I got off the train. I went to an ATM and withdrew money so I could pee. The machine slowly dispensed a single 50 Franc note. There may have been a sad trombone playing.

I gave up on the train station at that point. I opened my Hogwarts umbrella and started walking. The streets of Zurich were filled with adorable children and dogs. I found a bookstore, bought a book, and peed a glorious pee. If you are ever in Zurich, Orell Füssli has wonderful books and a free bathroom.

While I was all for a “where the day takes you” kind of day, I had one place I wanted to go in Zurich – Hiltl, the oldest vegetarian restaurant in the world. They opened in 1898. They have a huge buffet or you can order from a menu. I grabbed a plate and loaded up on everything from German potato salad to Thai tofu to pakoras and a deconstructed pumpkin pie thing. There were probably 80 dishes to choose from. You can go full ”all you can eat” buffet or order by the pound. I went for the latter knowing I might otherwise never leave. It was crowded with people of every age, locals and travelers. Despite the free wifi and protection from the elements, I got up and started walking. 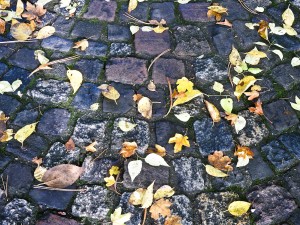 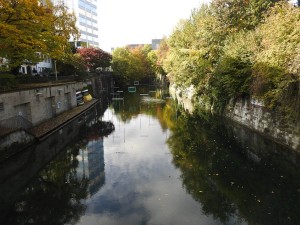 I crisscrossed bridges and wandered up and down cobblestone streets. I stopped and bought Pat and Earl Swiss Army knives because it seemed like the thing to do. The crowds were weird. I still wonder about the scene below. At once point, I thought a protest was gathering. I’m still not sure. 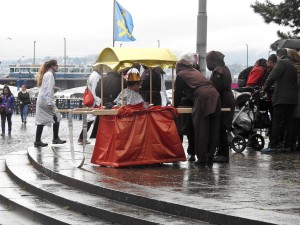 The rain let up and it turned into a beautiful day. I walked through part of the old town and down to the Opera House. From there I walked to Lake Zurich where I was gifted with the most amazing sight. A flock of about ten swans took off from the lake. I didn’t bother trying to photograph them because I was afraid I would miss watching them take flight. Along the lake I saw more swans, ducks, coots, and what I think may have been a raven. Those moments are why I travel. 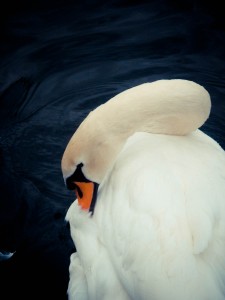 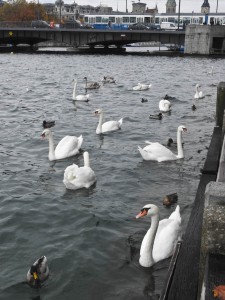 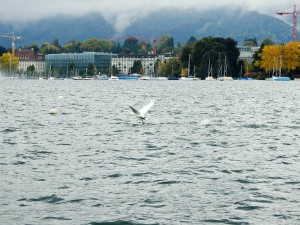 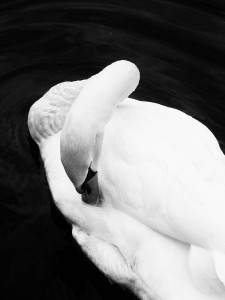 My back started hurting, but I wasn’t going to let that stop me. I attached the tens unit, slapped on another Icy Hot patch, and kept walking. I happened across an open-air antique market. I grew up buying and selling at antique and flea markets. I love visiting them in other cities and countries because you can learn so much about a place by what has (or doesn’t have) value. 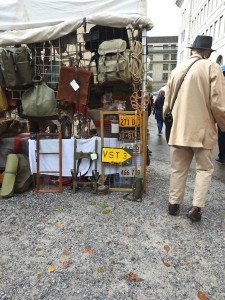 I walked past what I assumed was a sauna along the lake. I was intrigued by the idea but not enough to get naked in front of strangers in a foreign country or even figure out what to wear. I walked to a garden and then eventually to my other loose destination – the FIFA World Football Museum. I wanted to get Garnet a little something from my travels and this seemed a perfect spot. They also had free bathrooms and excellent wifi.

I kept walking and eventually made my way back to Hiltl. Via Happy Cow, I had found a ton of vegan restaurants in Zurich, but I wanted more of the pakoras for dinner. I packed a to-go box with fried foods and dessert. If I have one regret, it’s that I didn’t load an entire container with the mango mousse. 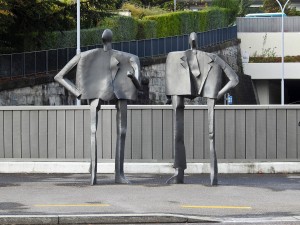 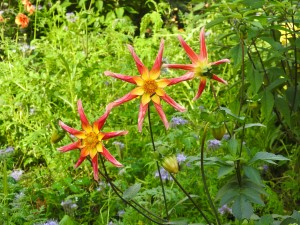 I walked back to the train station and bought weird flavors of Fisherman’s Friends and chocolates as gifts. The train ride back was far more crowded, but at least it was truly direct this time. There was a large family traveling in what appeared to be one of the first-class compartments. There weren’t enough seats in the compartment, so one of the men sat next to me. He kept leaving to talk with his family, but using an Evian bottle to save his seat. More than one person thought I was an asshole when I tried to pantomime someone was already sitting there, when clearly he wasn’t. Yay, language barriers! Eventually, when the guy came back, the older woman across the aisle quit glaring at me. 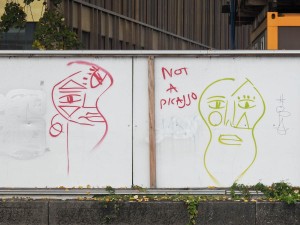 Back in Frankfurt I smoothly transferred to the U-Bahn and walked back to the hotel. I had walked nine miles and was ready to collapse, but I did it.

My day in Switzerland was as much about getting there as being there. I was uncomfortable at times and I think that is important. It is easy to avoid things that make you uncomfortable or that scare you, especially as you get older. Feeling vulnerable and unsure and still doing things that scare you is important. That considering “what’s the worst that will happen” and “what will I miss if I don’t do this” are opportunities. I also think that if more people put themselves in situations where they were surrounded by cultures other than their own, and simply listened, the world would be a better place.