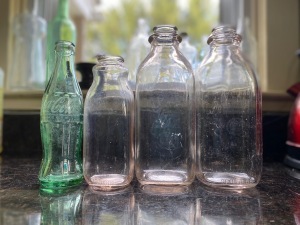 Some days I feel like I am fighting a war on three fronts. During the day, in front of the unblinking eye of a webcam, I fight a failing economy, trying to protect an industry already made vulnerable by distraction and the exaltation of stupidity. On the rare occasions when I venture out into the world, I fight an omnipresent, yet invisible virus. I am forced into situations where I hope strangers are doing the right thing and my inner cynic knows they aren’t. Inside, like the mortar that holds it all together, is my anxiety. I fight that day and night. I dig in the dirt. I lay awake at 2am playing Scrabble. I take walks. I put things in boxes and take them out again. I think about the complex gender of the platypus. Anxiety and I are at constant war and the tactics are all over the place.

I had to go to a grocery store this week. I go about every two weeks now. I forgot my usual mask and used a spare. It was tighter and heavier. I felt like I couldn’t breathe. It felt like I was having a panic attack. My nervous system decided that my heart shouldn’t be left out of the fun and made it start racing as I hunted for my Beyond Burgers and gluten-free English muffins.

Once home, my body was still buzzing. I had a shot of Writers’ Tears (a very fine Irish whiskey) while I disinfected the groceries. Still buzzing, I suggested to Patrick that we take a walk and go collect the old bottles we had found on Sunday. I proposed packing a flask because the buzzing was relentless.

I accidentally glugged when I should have sipped. Drunk and anxious is a bad combination. I know better. I broke one of my rules about drinking to manage my emotions. That’s one of the problems right now. Normal rules don’t seem to exist. Everything is blurry. Time isn’t even playing by the rules. Like WTF happened to April? March was 300 years long and then suddenly it was May.

We began digging in the old dumping grounds, delighting in our trash treasures. Then suddenly I was sobbing incoherently on a fallen tree. Everything pouring out in a chaotic rush. I cry maybe once a year. I sat there, near the ruins of an old house surrounded by broken bottles, and wondered what the former occupants worried about. The foundation appeared old enough that they could have sat in the same spot and cried about the Great Depression. Or polio. Or a child going to war. The problems don’t really change, do they? In the woods, tears blurred the centuries.

The tears stopped and my mood swung back to looking for old bottles and salamanders. Back to my time and my problems. Back to Factory Road. Somehow, as we clean it up and learn the land it feels both more and less real. We take care of the woods and they seem to take care of us. We went home with a broken terracotta pipe last week that made a perfect tiki torch holder. Monday, we retrieved mounds of groundcover, ideal for a shade garden, that had been dumped along the road. And this week they gave me a place to let go and breakdown. To cry and give voice to everything I had been holding inside. Something that was long overdue given the stress of the last two months. We gathered our bottles, my own now empty, and went home. 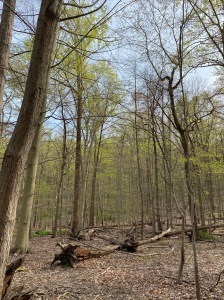 6 thoughts on “Bottling it Up”