We were incredibly lucky to squeeze in a quick visit to Chicken Run Rescue at its new location, just south of Minneapolis. Chicken Run Rescue started with its founders, Mary and Bert, rescuing cats and dogs in urban Minneapolis in the 1980s. As vegans, they saw the need for advocates and direct action for chickens and began working with Minneapolis Animal Care and Control. The birds who made their way to Mary and Bert’s home had been intended for slaughter, used for their eggs, for fighting and ritual sacrifice, and as hatching projects. The number of homeless birds has increased exponentially since they opened the sanctuary.

The recent upsurge in keeping backyard chickens has been detrimental for many birds. The Star Tribune noted an increase in stray birds in a 2013 story, “In 2001, Chicken Run rescued just six birds. Last year, Clouse and her husband, Bert, fielded almost 500 surrender requests for ‘urban farm animals,’ mostly chickens, and rescued more than 30, many with ‘special needs,’ such as chickens that lost feet to frostbite or reproductive cancers linked to constant egg-laying. Some of the rescues have been waiting for new homes for more than a year, she said. …‘I knew this was going to happen,’ Clouse said of the explosion in surrendered and abandoned chickens. ‘All the other sanctuaries and shelters have noticed an increase. It’s like watching a train wreck in slow motion.’”

As Mary told me, “Chicken Run provides the birds with sanctuary and foster/adoption placement when appropriate. Teaching and assisting others to help birds in their communities is accomplished through vibrant volunteer and education opportunities.” Promoting birds as sentient individuals is a core part of their outreach, as is adopting a plant-based diet.

Below are a few of the birds I had the pleasure of meeting. Mary provided me with a few of their stories (also below). Check out the Facebook page too. 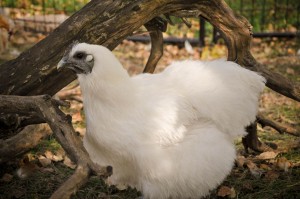 Mavis’s story: “Mavis Davis (aka Mabiff Dabiff) named after our beloved friend Karen Davis of United Poultry Concerns. With a severely crossed beak, she has trouble pronouncing s’s and v’s. Her beak deformity was likely the result of poor nutrition of her mother and in her young life.”

Derek’s story: “Derek was our 848th rescue. He and his sister, Rachel, arrived here in September 2012. They were apparently Advanced Placement students — they were found wandering on the U of M campus but couldn’t find their way back to the dorm. Fortunately, another kind student took them under her wing and contacted us. Good thing, they were only a few weeks old. They have grown up here with us. Rachel is still here too. Derek became a member of the Justice League, he and 2 other roosters, Butler and Quincy, went everywhere and did everything together. He has outlived his buddies and after their passing (heart disease very common in roosters), he was very depressed, not knowing where he would fit in without them. He recently got a job looking after hens, sometimes Renee, and Elisa, sometimes Janet and Carrie. He wasn’t sure at first just how to tidbit for them and supervise them, but now has it mastered. Looking after hens is hard wired into roosters, their purpose in life. Derek says its good to have a job.”

Rajij’s story: “Rajij is our 827th rescue. He is a timid juvenile Malay, probably born in December 2011. No spurs, barely a bump on his ankles. He and his brother Satar were discovered by police during a drug bust in North Minneapolis, each locked in a dark basement closet. They were both remarkably calm, quiet and healthy despite having plenty to protest about their life so far. They were constant companions at CRR. Satar passed away in 2013 and Raj grieved for him for a very long time. Raj is now our senior resident rooster and reviews his troops every morning with a powerful sense of duty and eagerness to serve. He loves having his head groomed, we keep a comb handy to preen him and keep those feathers gorgeous.”