*the trip was six months ago, but better late than never, right?

I wasn’t sure how vegan-friendly Grand Cayman would be and was pleasantly surprised. We tend to rent places with kitchenettes and this trip was no different. We stayed at Eldemire’s Tropical Island Inn, a lovely spot south of George Town. I’ve gotten adept at cooking with a couple of stove burners and a microwave. Plus, we got to repeatedly dine with the local chickens who lived right outside the room.

Our first night on the island, we had dinner at Sunset House,  a short walk from the inn. There was a large open-air bar/restaurant overlooking the water. After a day of travel, it was a lovely spot to drink cider and eat some curry. They had a bunch of vegetarian and vegan menu options clearly marked on the menu.

Our first stop the next morning was the local supermarket to stock up on staples and a few meals. We went to Kirk Market. A few paces inside the store we found vegan haggis flavored chips. A strange, but auspicious start. Their selection rivaled any grocery store at home. We found plenty and enjoyed many meals at the picnic table outside our room. 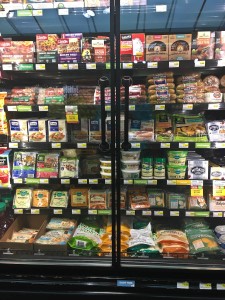 Bread and Chocolate is an all-vegan café in George Town. We went there after our first scuba lesson. The menu was almost overwhelming. It all sounded delicious. Patrick got the French toast. I ordered the tacos because I wanted to try the scotch bonnet aioli. They were quite good. Looking at the menu now, six months later, I am still second-guessing my choices and want to go back. 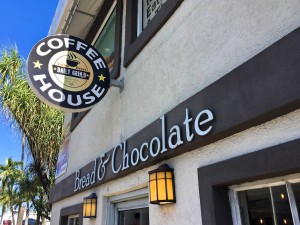 We arrived at Caymans Spirits before the doors opened. Thankfully, we were on vacation and doing a tasting and tour at 9am is thus magically acceptable. We enjoyed a variety of rum, vodka, and other spirits. Their Seven Fathoms Rum is aged just offshore, 42 feet below the surface. Travel tip – instead of always going out to drink, get a decent bottle of something local and enjoy it at your leisure. 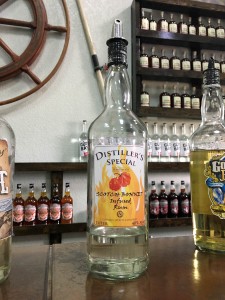 Rackam’s is a great spot to sit by the water and drink (cider again) and eat homemade chips.  Diners can also snorkel right off their ladder and swim out to see the wreck of the Cali. 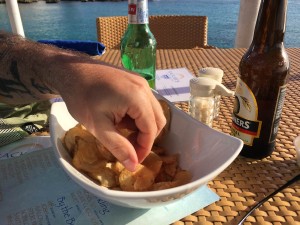 We only went out for dinner twice and the second time was at Southern Spice, an Indian restaurant in George Town. It was quietly elegant and the wait staff was knowledgeable about what dishes were vegan. I’m pretty sure I had a spicy channa masala. It sounds like something I’d do.

Overall, it was one of the most vegan-friendly spots we’ve found the Caribbean.

PS  – We still haven’t actually tried the haggis chips yet.