I’m not going to lie. The only reason Jaws Beach made our short list of places to visit on the trip is due to its place in pop culture infamy. The beach was used as the setting for Mike and Carla Brody’s home and the dock for his sailboat in Jaws: The Revenge. The movie is bad, yet fun to watch in that growling-shark, drunk-Michael Caine, exploding-shark kinda way. Michael Caine once said of the film, “I have never seen it, but by all accounts it is terrible. However, I have seen the house that it built, and it is terrific!” We’ve gone on quests to see dumber places, so off we went. 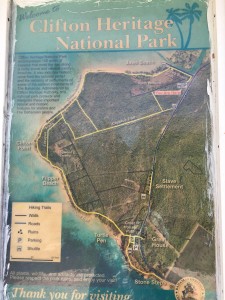 We drove out along the coast road toward the western end of New Providence Island. Traffic thins out considerably on that end of the island. Jaws Beach is a bit of a cove, tucked inside Clifton Bay, just north of Clifton Heritage Park. The first time we went was at the height of the day with temps well over 90F. We pulled into an empty parking lot and followed a trail back to the beach. Along the way we saw a snake, blue-tailed lizards, butterflies, and a small pond that would likely attract nesting and migratory birds other times of the year. We got down to the beach and were shocked by how beautiful it was. It was stunning. A postcard come to life. And almost entirely empty.

The water was completely calm and looked rather shallow. There is a broken dock, which to a snorkeler is mighty appealing. Garnet jumped into the water fully clothed and just sat there. We vowed to return the next day, our initial mockery replaced by awe at the beauty of the place. We also realized there was an access road and we could park under trees mere feet from the beach.

We went back the next day, and twice more after that. We learned it is a locals’ beach, drawing few tourists. The busiest day there we saw maybe 30 people, other times we had the beach almost to ourselves. It was a small, quiet place. We noticed pizzas being delivered. I watched as a girl swam, holding her pizza aloft out of the water, surfacing to take a bite. She’s my new hero.

The first time we snorkeled, we all spotted batfish, which were so amazing that they deserve their own post. Under the docks were thousands of small silverfish, as well as schools of snappers, young reef fish, and even stingrays. The water was so warm, clear, and still that it was some of the best snorkeling I’ve ever experienced. I could easily dive down and watch fairy basslets protecting their homes, pink-tipped anemones swaying in the current, and watch young squirrelfish peering at me suspiciously. What started as a joke is now one of my favorite beaches in the world.