As Tolstoy once said, “All happy families are alike; each unhappy family is unhappy in its own way.” We usually post here about happy traveling and, in doing so, many happy trips are alike. For a change of pace, I thought I would delve into that part of work travel that we hide from view: the mundane. For every excursion with a spectacular sunrise, perfect meal, and delightful museum, there is a rainy, hungry, and rushed trip.

At 5:30 a.m., when the alarm bleated my alert that the day was beginning, I was busy trying to convince Robert Carlyle that a lake was a loch and a white horse was a unicorn. Even Begbie looked at me like I was crazy and informed me he needed to return to his family. I awoke thinking, “Doesn’t matter – I had a conversation with Robert Carlyle.” I knew the sodden morning would mean a slow drive to the airport, so instead of getting up early and I found myself throwing make-up and clothes I should be wearing in my bag and hurtling out the door and onto I-695.

The security lines were almost non-existent, probably because anyone with a choice had decided that flying on a day when there were tornado, wind, and thunderstorm warnings from Texas to New York was a bad idea. I went through the scanner and the TSA agent decided I needed a full-body grope. It was thorough enough for her to discover that my tits are a lie of foam and elastic.

The flight to Louisville was only half-full and my colleague and I luxuriated in an empty middle seat. We arrived under stormy skies and picked up our rental car. We hopped onto I-64 and headed east. A little over an hour later, we arrived in Lexington, KY. The drive included rain, sun, dramatic clouds, and waterfalls spilling over the cut rock walls that line the highway. It also involved gusts of wind, tractor trailers, a trucker texting and swerving, and skipping lunch.

We did our work stuff and offered to take the people we met with out to dinner. I’ll admit to a bias. I assumed being in a college town meant that vegan options would be plentiful. Instead, I choked down a plate of leaves. I am vegan because I like animals, not because I like vegetables. 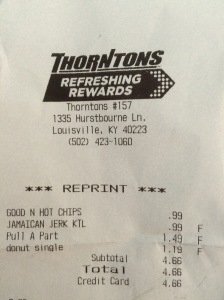 We left Lexington and drove back to Louisville. Once on the outskirts of the city, I stopped for gas and gulped down a bag of jerk-flavored kettle chips. (And also got a bag of hot chips, in case we had a long night ahead of us.) 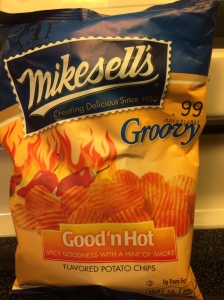 We had already received the alert that our 9:00 p.m. flight was delayed, as well as texts and photos from our family members dealing with the crazy-assed thunderstorm that was battering the east coast. There was flooding and tornados all over our soon-to-be flight path. A violent thunderstorm in February…and yet the climate change-deniers persist.

With the temperatures now 20 degrees colder than when we arrived, we made it back to the airport about 7-8 hours after we had left it. I’ll give Louisville airport this – the car rental return was super fast, close and easy, and the trip through security was speedy and friendly. On the downside, most of the stores were closed by 7:00 p.m., and we had hours to kill.

We found our gate, where rumpled souls from the much-delayed 4:15 p.m. flight to Baltimore were still milling about. It was scheduled to leave at 8:30 p.m. Hmmm, I wonder?

With my most pleasant, earnest face I approached the gate agent. “We’re scheduled for the 9:00 p.m. flight that is now delayed,” I said. “Is there any chance of getting on the delayed 8:30 p.m. flight?” I closed with a winning smile that I hoped didn’t look vaguely threatening.

Twenty-five minutes later I was wedged in the middle seat (eating a snack from the Louisville Vegan Jerky Company), grateful to be going home and joyous that, instead of being delayed, we were headed out 30 minutes earlier than planned.

For all the perfunctory aspects of tedious travel, this still wasn’t a bad trip. From getting to know a new coworker and the unexpected waterfalls to new flavors of potato chips and getting on an earlier flight, these small moments were enjoyable. Then again, maybe I was just counting those frequent-flier miles.

*This is in no way an indictment of Kentucky. I’d love to explore the weird museums, distilleries, and attend the Harry Dean Stanton Film Festival.